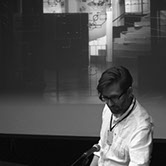 Editor at Drawing On

Piotr is an architect, researcher and exhibition designer. He graduated from the WarsawUniversity of Technology (BSc in 2006) and the University of Edinburgh (MArch 2009). His Master's thesis project titled Restituted Spaces was awarded the Architecture Prize by the Royal Scottish Academy of Arts and Architecture, and nominated to the RIBA President's Silver Medal award. Piotr also holds two research degrees from the University of Edinburgh: a Master’s (2010) for a thesis on gestural aspects of architectural representation (developed with the support of AHRC), and a PhD (2017) for a design-led thesis on Warsaw’s architectural imaginaries, made possible through support of the Principal’s Career Development Scholarship.

Since graduating from doctoral studies Piotr has practised as an architect and designer for private clients and architectural practices in the UK and Poland. He is a co-founder and editor of the Edinburgh’s architecture research journal Drawing On, he designs and writes.  Among Piotr’s recent publications are a paper on the historic Tchorek-Bentall art studio at 36 Smolna Street in Warsaw, published in a Polish Academy of Sciences’ journal Konteksty, and two contributions to Mark Dorrian’s and Ella Chmielewska’s edited book W-Z: Divisible City, by Wedge Publications, 2018.