Co-Director of the art, architecture and urbanism atelier Metis. His books include (with Adrian Hawker) Metis: Urban Cartographies (2002), (with Gillian Rose) Deterritorialisations: Revisioning Landscapes and Politics (2003), (with Jane Rendell, Jonathan Hill and Murray Fraser) Critical Architecture (2007), Warszawa: Projects for the Post-Socialist City (2009), and (with Frédéric Pousin) Seeing from Above: The Aerial View in Visual Culture (2013).  Among recent articles by him are ‘The Way the World Sees London’ in A. Vidler, ed, Architecture Between Spectacle and Use (2008); ‘Transcoded Indexicality’, Log 12 (2008); ‘The Aerial Image: Vertigo, Transparency and Miniaturization’, parallax 15(4) (2009); ‘Falling Upon Warsaw: the Shadow of Stalin’s Palace of Culture’, The Journal of Architecture 15 (1) (2010); ‘On Google Earth’, New Geographies, 4 - Scales of the Earth (2011); ‘Adventure on the Vertical: Powers of Ten and the Mastery of Space by Vision’, Cabinet, 44 (2011/12); ‘Utopia on Ice: the Sunny Mountain Ski-Dome as an Allegory of the Future’, Cabinet, 47 (2012); and ‘Voice, Monstrosity and Flaying: Anish Kapoor’s Marsyas as a Silent Sound Work’, Architectural Theory Review, 17(1) (2012).  His book of collected essays, Writing on the Image: Architecture, the City and the Politics of Representation, will be published in 2014.  He is currently working on the political history of air-conditioning, and is member of the advisory board of the Institute for Advanced Studies in the Humanities at the University of Edinburgh, where he is organizing a research theme on ‘Atmospheres and Atmospherics’: He is currently a visiting professor at Tianjin University, China, and at Arkitektskolen Aarhus, Denmark. 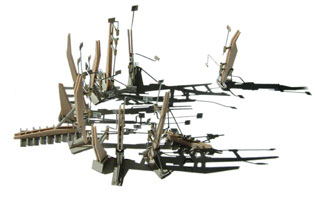