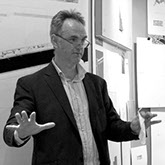 School of Architecture and Landscape

Academic papers have been published in China, Denmark, France, Germany, Holland, Israel, Spain, Turkey, UK, and USA with core interests being the architectural-political-philosophical overlap on issues of representation and production.

In my research and pedagogy, design and theory are intersecting practices.