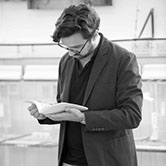 Chris co-organised and chaired the symposium Plenitude and Emptiness, and co-founded the architectural design research journal Drawing On. His current research concerns the architectural exhibition as a means of investigation and speculation, framed through questions of the fragment, and research conducted in collaboration with Dr Maria Mitsoula into the relationships of cities to landscapes, the imaginary and the absurd through Albert Camus and Vilém Flusser.

Designs for (the Failure of) Institution: A Rake’s Progress, an eccentric chest, banking and Edinburgh.

Re-calibrated Urbanism: Shifting Silt to bridge the banks of the Vistula.